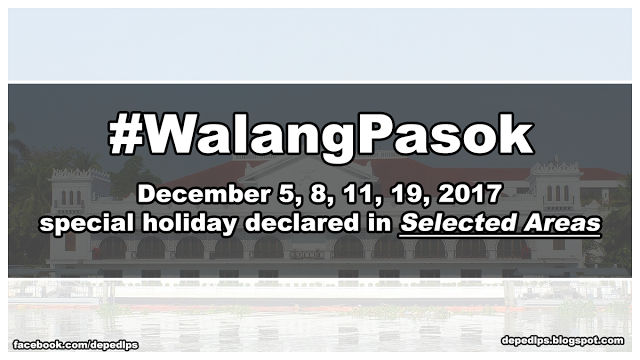 MANILA, Philippines â€” There will be no classes and work in selected areas for the specific dates of December 2017 (5, 8, 11 and 19) to give way for the celebration of local events, MalacaĂ±ang Palace declared.

Note: December 8 is not yet a special non-working national holiday for the celebration of the Feast of the Immaculate Conception of Mary. Once approved by the Senate and signed by President Rodrigo Duterte into law, it will be added to the long list of holidays the country has in one year.

Proclamation No. 327: Special non-working holiday in Muntinlupa City on Tuesday, December 19 for the celebration of the Centennial Year of Muntinlupa as an independent local government unit.

Proclamation No. 346: Special non-working holiday in the City of Palayan, Nueva Ecija on Tuesday, December 5 for the celebration of its 52nd Foundation Day.

Proclamation No. 357: Special non-working holiday in the City of Antipolo on Friday, December 8 for its 426th Founding Anniversary.

Proclamation No. 358: Special non-working holiday in Taguig on Friday, December 8 for the Cityhood Anniversary.

Proclamation No. 359: Special non-working holiday in the municipality of Agoo, Province of La Union on Friday, December 8, 2017 for the 439th Foundation Anniversary.

Proclamation No. 2226: By virtue of Proclamation of late President Ferdinand Marcos. This special non-working holiday on December 11 (Monday) known as “Araw ng Pampanga” applies to the province of Pampanga only, celebrating its 1571 founding as one of the nation’s oldest provinces.

NoteÂ that such holidays are applicable only to the immediate area concerned.

MalacaĂ±ang Palace said that it is proper that the people on the said areas be given full opportunity to celebrate and participate in the occasion with appropriate ceremonies.

As a special non-working holiday in the locality, workers who report for work get 1.3 times their daily rate. Those who do not work on the day, meanwhile, get no pay.

As defined in the Administrative Code of 1987, Book III, Chapter 2, Section 4, Proclamations are “acts of the President fixing a date or declaring a status or condition of public moment or interest, upon the existence of which the operation of a specific law or regulation is made to depend, shall be promulgated in proclamations which shall have the force of an executive order.”