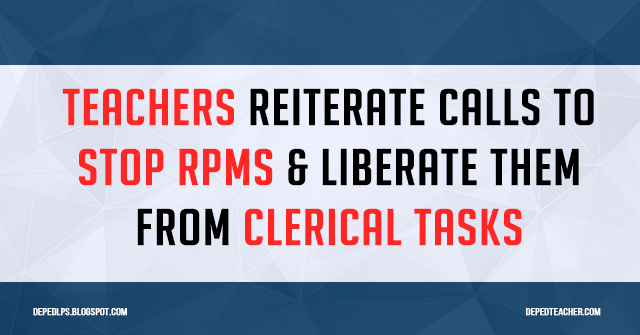 As school break starts, the Teachers’ Dignity Coalition (TDC) again call on the DepEd leadership to consider junking the results-based performance management system (RPMS) and revert to the simplified performance appraisal system for teachers (PAST) which has been in used for several decades until the introduction of RPMS in 2012.

“We are supposed to be in our families or taking a vacation right now after the daily teaching routine for 10 months, yet most of our colleagues are still required to report to their schools and accomplish this RPMS.” Said Emmalyn Policarpio, the group’s Secretary-General. “We are teachers and we are expected to teach our pupils and students, a duty that we diligently performed in our classrooms for the whole year, thus we deserve a break. This RPMS demands so much of our time, during and unfortunately, even after the school year.” She added.

RPMS is the performance rating system required by the Civil Service Commission (CSC) since 2012. While it is based on CSC order, the implementation varies from agency to agency.

Benjo Basas, the group’s chairperson said they have raised this concern many times and they are still waiting for the DepEd’s action since they had several dialogues last year. The system, according to him “requires the submission of documentations of practically everything a teacher does. It is a rigid and document-based performance system that causes stress and anxiety and steals the time of teachers for teaching. The most important factor in teaching and learning process is the time spent with the learners and not with documentation which cannot be used to gauge teachers’ actual performance. There should be a change in the policy.” He said.

The TDC last year raised this concern and immediate seek for a dialogue with DepEd officials with the hope that the authorities will at least suspend its implementation. Along with the RPMS, the group also demanded the reduction of teachers’ clerical tasks and another rigid lesson preparation, among other issues which they labelled as Seven Demands. Due to failure to significantly address their concerns, the TDC staged a 12-day picket in front of the DepEd’s main office in Pasig from September 24 to October 5, 2018.

“Our earlier speculation can now easily be concluded, this RPMS will do more harm than good. We again call on DepEd authorities to consider halting the implementation of the RPMS and make use of the old system which is both lighter and proven effective. Teachers need more time for teaching rather than performing clerical work and documentation of tasks performed.” Policarpio ended.

Policarpio said that they are willing to sit in another dialogue with DepEd officials to tackle and resolve the issue and come up with a mutual solution.