Statement on the meeting with PDEA, PNP, DDB on the proposed mandatory drug testing for Grade 4 learners

Statement on the meeting with PDEA, PNP, DDB on the proposed mandatory drug testing for Grade 4 learners 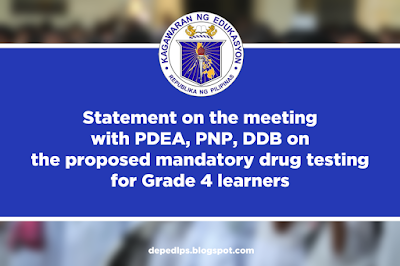 PASIG CITY, July 10, 2018 – Sitting down with the Philippine Drug Enforcement Agency (PDEA), the Dangerous Drugs Board (DDB), and the Philippine National Police (PNP), the Department of Education (DepEd) stood its ground in limiting the random drug testing to secondary and tertiary level students, as mandated by the law.

“Nag-agree kami na kanya-kanya kami ng trabaho – sa amin ang preventive, sa kanila ang enforcement. . . We have to respect what each of us are doing because we have the same goal, which is to fight illegal drugs,” Secretary Leonor Magtolis Briones stated as the four agencies explained their sides during the July 10 meeting.

The three agencies showed DepEd their data on the dramatic increase in the number of children who are involved in prohibited substances and their proposed plan of action.

Reiterating that the DepEd’s mandate from the President is to enhance the curriculum on drug education for learners nine years old and above, the four agencies agreed to provide each other advice, share information, and meet regularly to solve the menace of illegal drugs.

“The important thing is, I think, all of us realize that the drug problem is not only a police problem, or an education problem, it’s a problem of society. And this can only be minimized if society also changes; We are engaged in the same battle, we are using different methodologies and we are focusing on different clientele,” the Education chief concluded.