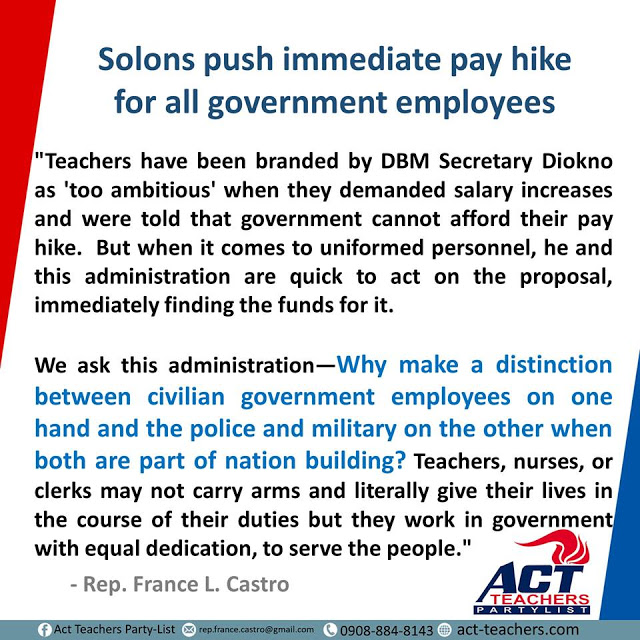 The solons stressed this at the hearing of the House Appropriations panel today on House Joint Resolution 18 for the increase in the base pay of military and uniformed personnel in the government.

“The Duterte administration must address the legitimate demand of civilian government employees for substantial salary increases. Majority of them are clerks, utility workers, public school teachers, nurses, social workers and other rank and file employees who also have the same needs like uniformed personnel,” Tinio said. “They have the same right to be recognized and rewarded for their hard work as our soldiers and police officers, the same right to a decent life.”

“The Department of Budget and Management and the Duterte administration were so quick to express support for the proposed salary increase for uniformed personnel. However, they can commit to only ‘study’ the proposed increases for civilian government employees, and they’re only going to do that by 2019, after the third and fourth tranches of EO 201,” he added.

The resolution will raise the monthly pay of entry-level cops or Police Officer 1 (PO 1) as well as privates in the DND, fire and jail officers, apprentice seamen from P14,834 to P29,668 starting January 2018, with corresponding increases for higher ranks. It will cost government an additional P63.4 billion in the first year of implementation.

“Teachers have been branded by DBM Secretary Diokno as ‘too ambitious’ when they demanded salary increases and were told that government cannot afford their pay hike. But when it comes to uniformed personnel, he and this administration are quick to act on the proposal, immediately finding the funds for it,” Castro said. “We ask this administration—Why make a distinction between civilian government employees on one hand and the police and military on the other when both are part of nation building? Teachers, nurses, or clerks may not carry arms and literally give their lives in the course of their duties but they work in government with equal dedication, to serve the people.”

“There should be no special treatment in favor of just the police and military. We will continue to demand for salary increase for teachers, non-teaching employees, and all other government employees,” Tinio ended.