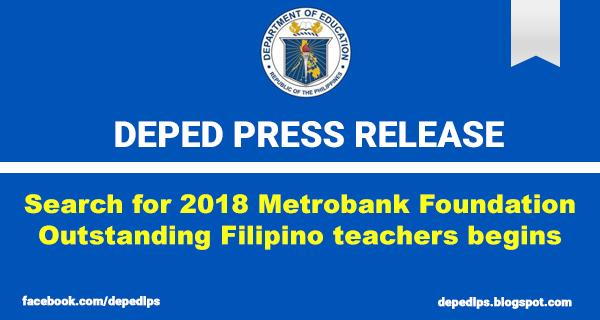 The Award aims to recognize outstanding Filipinos who are responsible citizens, exemplary public servants, and agents of positive change in their respective communities.

Four teachers will join three soldiers and three police officers to comprise this year’s Metrobank Foundation Outstanding Filipinos. Each awardee will receive P1 million cash incentive, a trophy, and a gold medallion. They will also be awarded during Metrobank’s 56th anniversary in September.

Education Secretary Leonor Magtolis Briones acknowledged the vital role of teachers in instilling relevant knowledge in the minds and honing the skills and talents of all learners, which serve as key ingredients for the betterment of the nation. The Education chief also seconded the message of MBFI President Aniceto Sobrepeña, that by giving them due recognition, the awardees will inspire the Filipino nation to contribute in realizing and achieving our collective task of building a strong and progressive society.

The Search is open to all Filipino educators teaching in the elementary (including kindergarten level, provided it is part of the integrated curriculum or part of an elementary school system), secondary or tertiary level, including graduate school and alternative learning system, with full-time or permanent appointment and with full teaching load.

Nominees must have an average performance rating of at least “very satisfactory” in the past ten years of teaching and must have completed academic requirements for Master’s Degree.

Winners of local awards organized by provinces and municipalities for outstanding teachers are encouraged to join, provided the eligibility requirements are met.

Nominations must come from qualified nominators; self-nomination shall not be accepted nor considered. The deadline for submission of nomination forms is on or before March 1, 2018, through courier to Metrobank Foundation, 4th Floor, Executive Offices, Metrobank Plaza, Sen. Gil J. Puyat, Makati City.

The nomination form and the detailed guidelines are accessible through the DepEd Memorandum No. 3, series of 2018, or the 2018 Metrobank Foundation Outstanding Filipinos – Award for Teachers, which is available online at http://www.deped.gov.ph/memos/dm-003-s-2018. You may also visit Metrobank Foundation’s official website at www.mbfoundation.org.ph and the Awards’ official Facebook page at www.facebook.com/mbfi.outstandingfilipinos for more information.