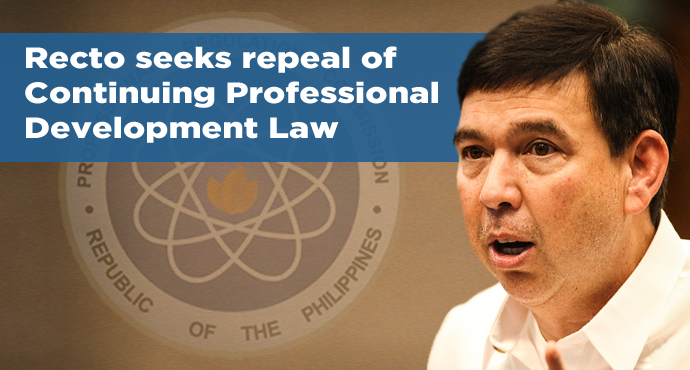 Senate President Pro-Tempore Ralph Recto is seeking the repeal of Republic Act 10912, or the Continuing Professional Development (CPD) Law which he claims hinders the improvement of the country’s professionals.

Recto said professionals from various disciplines, particularly, teachers and nurses, are protesting the supposed difficulties in getting CPD credits and in having their licenses renewed.

Under the law, professionals are required to take a certain number of CPD units from training and similar learning activities before they can renew their licenses before the Professional Regulation Commission (PRC).

Recto said a large nurses group, for example, lamented that nurses lack the money and the time to complete the 45 CPD units which could cost between P15,000 and P30,000.

He also cited an online survey reportedly conducted by the PRC wherein 90 percent of the respondents want the CPD law abolished and its implementation stopped.

Recto, heeding the clamor, said it is high time to “unburden” the 3.2 million registered Filipino professionals of RA 10912’s requirements, especially amid the government’s efforts to speed up processes and services.

“Compulsory requirements of dubious value like CPD go against this trend,” Recto said.

“Pulling the plug on the CPD experiment should give all of us time to ponder other means of improving professional competence without the coercive force of the CPD model,” he added.

Recto said he hopes that Congress could find a better system for professional development “without the disruptions, inconveniences, and the high expenses the present one causes.”

At least three members of the Senate earlier filed their bills to amend RA 10912, which lapsed into law on June 30, 2016.