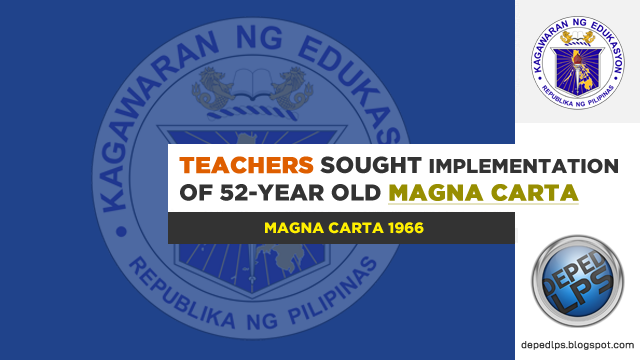 The Teachers’ Dignity Coalition (TDC) said that the implementation of Magna Carta for Public School Teachers (RA 4670), a law which was enacted 52 years ago will solve many of the teachers’ present woes and would amount to more than P3, 000.00 promise of anniversary bonus for DepEd employees.

“More than a one-time monetary bonus, our teachers deserve comprehensive benefits and incentives package that are guaranteed under the existing laws, particularly the Magna Carta for Public School Teachers. A favorable pronouncement from the Secretary on its implementation would be more than any Christmas present. Definitely more than the P3,000.00 surprise.” Said Benjo Basas the group’s national chairperson.

Basas added that the teachers were not surprised when the Secretary declared her Teachers’ Day gift in Ormoc last October 5 because they already “knew about the anniversary bonus and was already confirmed by Usec. Anne Sevilla in one of our dialogues as early as January this year.”

“While we are thankful that the Secretary has exerted the efforts to ensure that DepEd employees would be entitled to anniversary bonus because the amount of P3, 000 would surely help us during these times, we are still praying that the she would announce her intention to implement the provisions of Magna Carta, especially those that have something to do with teachers’ welfare.” Basas added.

Basas cites certain provisions like the teachers’ salary progression from lowest grade to highest grade within a maximum period of ten years, overtime pay for those who teach beyond six hours, free medical examination and hospitalization, paid study leave for those who served for seven years, special hardship allowance and the criteria set for determination of salaries, among others.

“This Magna Carta is considered as bible of Filipino teachers and lists several provisions that ensure the rights, welfare and dignity of the country’s public mentors. However, many of its provisions have not been implemented since the 1960s, and many still are selectively and partly enforced.” Basas lamented.

The TDC again wrote a letter addressed to Sec. Briones asking the latter for a meeting to discuss the implementation of the said law. Some of the provisions of Magna Carta namely health benefits and six-hour workday were among the Seven Demands of the TDC that prompted the group to stage demonstrations in the DepEd Central Office including a 12-day picket last month.

“Since the government has failed to provide adequate remuneration for its teachers, it should at least consider fully implementing the Magna Carta.” Basas ended. #