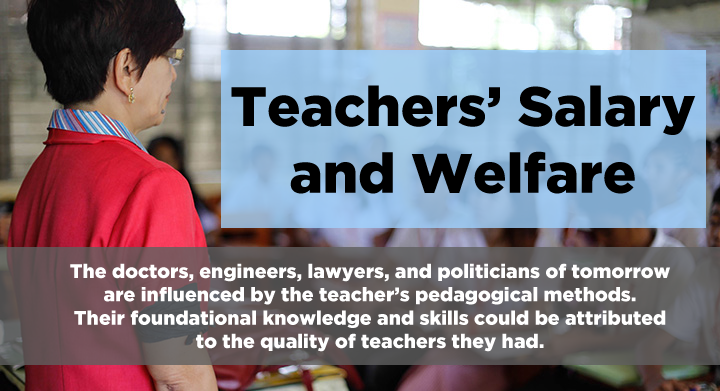 Teachers do not really ‘profit financially’ from teaching because they don’t actually get rich by mere doing so. Thus, their lifestyle is sustained by what they earn from their employers. But ironically, those who were taught by teachers became ‘rich and famous’. However, seeing teachers as mere employees is a myopic view which can be regarded as very limiting and counter-productive.

The contributions of teachers are essential to both individual and national growth. Teachers usher the future by preparing the kids of today. Teachers impart to students the tools for tomorrow. The doctors, engineers, lawyers, and politicians of tomorrow are influenced by the teacher’s pedagogical methods. Their foundational knowledge and skills could be attributed to the quality of teachers they had.

However, some teachers are trapped with the vicious economic rat race. Trying to prove their worth, they succumb to oppressive systems and parasitic myths. Some justify that teachers need not be rich to prove something but deep inside, they anguish and mourn about their own circumstances. As a result, teachers lack the ‘moral ascendancy’ to empower students.

A disgruntled teacher is a walking time bomb for a national disaster. Students who learn from them are destined to take for granted their nation’s history and aspirations. Students become walking personifications of cynic citizens. The future will be given to doubtful and indecisive citizens or to citizens with excessive pride and outright sense of entitlement but have no resolve. Eventually these types of students will govern the country, at the very least, might ‘run away with the country’s money’. Sowing the seeds of disillusionment starts with a resentful teacher.

No matter how good, noble, and great teachers are, if the government will not take care of them, the future is as bleak as it can be — a barren place full of economic vultures and death-eaters of dreams.

The future is better actualized with an army of ‘happy and enthusiastic’ teachers. Dr. Jose Rizal, the great patriot, wrote: “The school is the base of society; the school is the book wherein is written the future of a people! Show us the school and we will show you the kind of people there are!”

Why increase teacher’s salary? Why not?