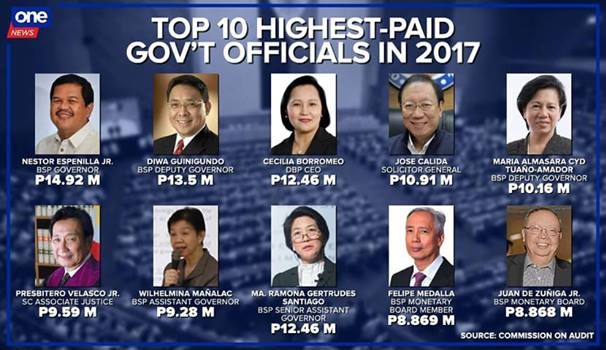 The Alliance of Concerned Teachers lambasted the several -million-peso pay each received by government high-ranking officials in 2017, based on the report of the Commission on Audit.

Media reports revealed the top ten highest paid public officials last year which include seven officials of the Banko Sentral ng Pilipinas, the President and CEO of the Development Bank of the Philippines, Solicitor-General Jose Calida and Supreme Court Justice Presbitero Velasco Jr. The BSP governor received a total of Php 14.9 million in compensation from the government last year.

“It is grossly immoral and highly unfair that these top bureaucrats take enormous amounts of taxpayers’ money while teachers, public employees and the common folks are reduced to hand-to-mouth existence due to lack of substantial pay hike amid grueling inflation,” said Benjamin Valbuena, ACT Philippines Chairperson.

Valbuena pointed out that “the utterly inequitable salary scheme in government which was benchmarked on the exploitative practice of the private sector” as well as the “lax policies on allowances, bonuses and other emoluments for high officials” enable the top officials to “reward themselves with scandalous sums of money.”

Under Executive Order 201 which the Duterte administration continues to implement, government employees with salary grades 1 to 15 will receive a graduated salary increase of 12% to 22% from 2016 to 2019. High-ranking officials under salary grades 31 to 33, on the other hand, will get 184% to 233% pay hike in the same period. Teacher 1 level gets the lowest incremental increases equivalent to only Php 528 to Php 575 per month each year.

“The Duterte administration’s economic managers came from the same mould as those of the past regimes’ who worship neoliberal economics. Purportedly for government employment to be competitive, the pay should be at par with that in the private sector. They conceal the truth that private business operates on the premise of exploiting cheap labor to amass big profits for those on top. Such is unacceptable in public service,” Valbuena explained.

Valbuena said that such is the “ill mindset” of the current government that is why they say that public school teachers are not underpaid despite the monthly gross pay of Php 20,179 and actual take home of only Php 17,985.

“The neoliberal framework is bankrupt, the source of our poverty, and should be abandoned altogether. Basic pay should approximate the genuinely decent standard of living while top officials must be role models in selflessness and prudence,” said Valbuena.

ACT pushes for the increase in basic pay of teachers to Php 30,000, college instructors to Php31,000 and salary grade 1 employees to Php16,000. The group is set to mobilize thousanda of teachers nationwide on Pres. Duterte’s third State of the Nation Address to demand for immediate substantial pay hike.