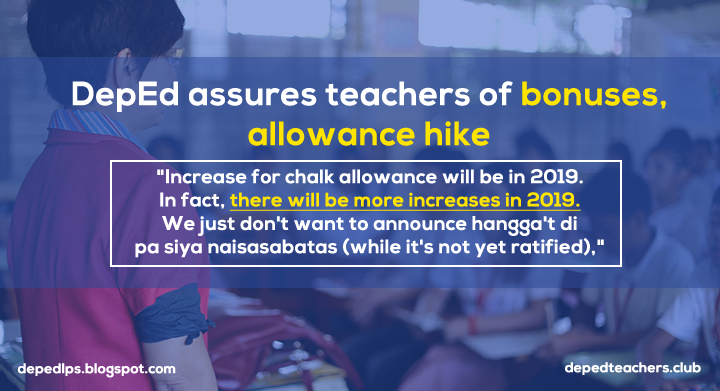 MANILA — An official of the Department of Education (DepEd) assured on Monday that all teachers and personnel will receive their bonuses for the year.

“We will make sure that everyone will receive the anniversary bonus, this is PHP3,000. That’s all employees. Also, the year-end bonus,” DepEd Undersecretary Finance-Budget and Performance Monitoring Annalyn Sevilla said in a press briefing.

Sevilla said DepEd has issued the guidelines on the distribution of the anniversary bonus as early as October.

She added DepEd is a big organization, so it might take time for teachers and personnel in remote schools to receive their bonuses.

Sevilla added DepEd has worked hard to implement an increase in the allowances and the benefits stated in the Magna Carta for Teachers and other personnel.

“Increase for chalk allowance will be in 2019. In fact, there will be more increases in 2019. We just don’t want to announce hangga’t di pa siya naisasabatas (while it’s not yet ratified),” she said. (PNA)