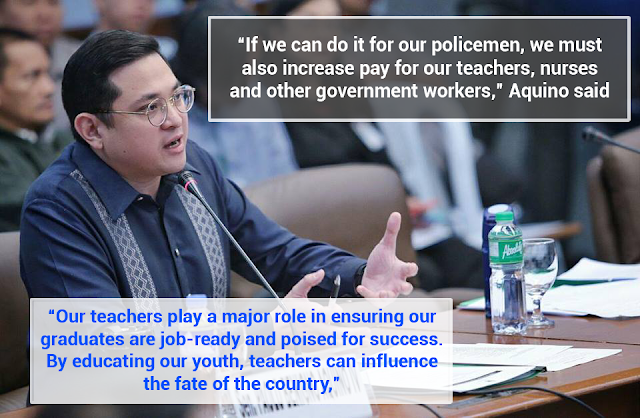 Senator Paolo (Bam) Aquino IV on Thursday urged the government to prioritize increasing the meager salaries of public school teachers and other government professionals, instead of making them wait until 2020.

Aquino made the call after the government vowed to also increase the compensation of teachers and other workers in the public sector in 2020, and not this year.

This despite granting a salary hike to members of the Philippine National Police (PNP) now tasked to implement anew the Duterte government’s war on drugs.

The senator said he was disappointed at the government’s move, pointing out that most of these teachers and government employees are buried in debt, apart from experiencing personal problems.

If we can do it for our policemen, we must also increase pay for our teachers, nurses and other government workers,” Aquino said in a statement.

“Our teachers play a major role in ensuring our graduates are job-ready and poised for success. By educating our youth, teachers can influence the fate of the country,” he said.

Aquino said the P171-billion debt of teachers from legitimate lending institutions is due to a confluence of factors, including inadequate wages, delayed salary while some use the money to cover the cost of their teaching materials.

Presidential spokesman Harry Roque Jr. earlier disclosed that the President, during a Cabinet meeting last Tuesday directed Cabinet members to look for ways and means to increase the teachers’ pay in the next two years, a move affirmed by the entire Cabinet.

Roque said the administration will implement the last tranche of the Salary Standardization Law (SSL) for public school teachers which will be in 2019, before the President’s promised wage increase will apply.

The President, he said, proposed the idea of raising teachers’ salaries following his signing into law of the measure increasing the compensation of policemen and soldiers last month.