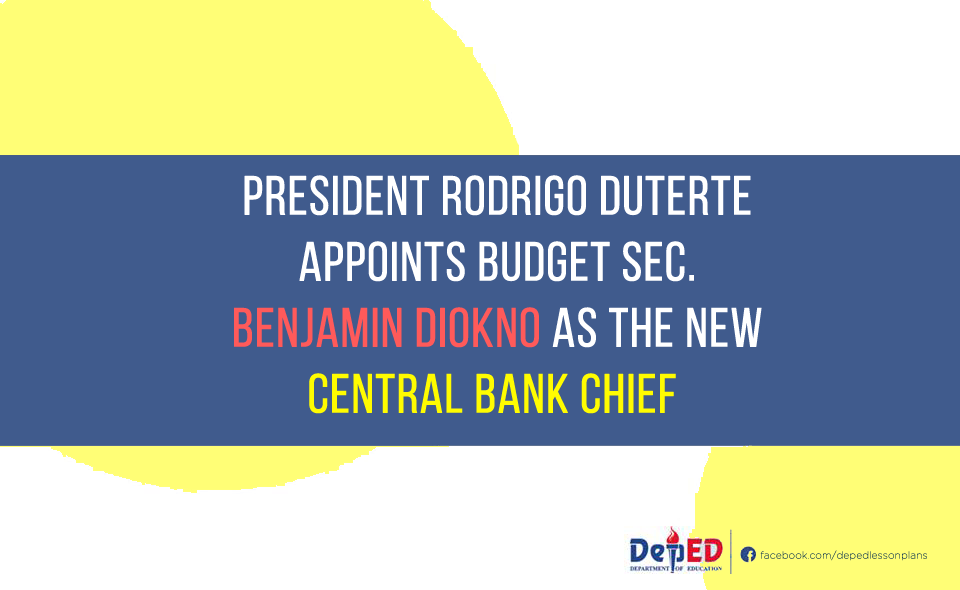 “We wish Secretary Diokno all the best in his endeavors as the new chief of the country’s central monetary authority,” Panelo said in a statement.

“With him at the helm of the Bangko Sentral ng Pilipinas, our banking institutions are in good and competent hands,” he added.

Panelo said the Palace expects Diokno to carry on reforms started under Espenilla’s leadership in line with Republic Act (RA) 11211, which among others, restored the BSP’s authority to issue debt papers as part of its operations.

“In his new tour of duty in the BSP, we expect incoming Governor Diokno to spearhead reform initiatives that will align the financial institution’s operations with international best practices and improve its corporate viability, among others, in line with Republic Act No. 11211, which was signed into law by President Duterte just last February 14,” he said.

“We thank Secretary Diokno for his services to the nation and to this Administration as Secretary of Budget and Management, a position he similarly held under the Estrada Presidency,” he said.

Meanwhile, Panelo cited Diokno’s achievements as budget chief, including his being “ instrumental” in presenting a budget that laid down the foundation for a “Matatag, Maginhawa at Panatag na Buhay” or a solid, comfortable and stable life.

“A job well done indeed, and expertly at that,” Panelo said.

Diokno was also hailed for his contributions as undersecretary for budget operations under the Aquino administration where he provided technical assistance to several major reforms, such as the design of the 1986 Tax Reform Program.

He was also recognized for being budget chief during the Estrada administration where he instituted several reforms, including the adoption of information and communications technology in the government procurement system.

Malacañang has yet to announce who will replace Diokno as budget secretary.

Previously, Diokno was embroiled in controversy after being accused by House of Representatives appropriations committee chair Rolando Andaya Jr. of allegedly orchestrating “insertions” in the PHP3.757-trillion proposed national budget for 2019.

However, Duterte himself has stood by Diokno’s integrity amid calls for his resignation. (PNA)