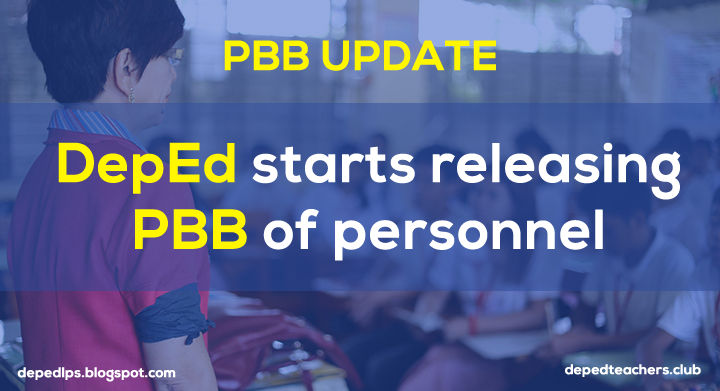 School-based personnel of the Department of Education (DepEd) will soon be receiving their Performance-Based Bonus (PBB) for Fiscal Year (FY) 2017.

Issuing a statement, DepEd notified its school-based personnel that as of January 21, 2019, the Region III Office “has started releasing” the PBB for FY 2017. Meanwhile, DepEd noted that the Schools Division Offices (SDOs) of the National Capital Region (NCR) and Regions IV-A, XI, and XII “have received” their Special Allotment Release Order (SARO) from their respective Department of Budget and Management (DBM) Regional Offices.

“SAROs are also being processed by the respective DBM ROs for release to the SDOs of DepED Regions IV-B, V, and VII,” DepEd said.

Meanwhile, DepEd clarified that as for the remaining DepEd Regional Offices, “their documentary requirements are undergoing the evaluation” of the DBM Central Office. “Once cleared, these shall also be endorsed to the respective DBM Regional Offices for release of funds,” DepEd added.

The PBB is “a top-up incentive given to personnel of bureaus or delivery unit in accordance to their contribution to the accomplishment of their department’s overall targets and commitments.” The AO25 Inter-Agency Task Force (IATF) “sets specific conditions and reviews the agency’s accomplishments within a fiscal year to determine the eligibility of the department and its personnel” to receive PBB.