Because of House Resolution No. 1607 (Inquiry on the Delayed 2016 PBB) filed by Representatives Antonio Tinio and France Castro, the House Committee on Basic Education and Culture conducted an inquiry into the delayed release of the performance-based bonus (PBB) for fiscal year 2016 of public school teachers, non-teaching personnel, and other employees under the Department of Education.

DepEd Undersecretary Mateo said that 6 out of 16 regions were already given their PBB 2016. He also said that NCR’s 2016 PBB will be released within the week.

The SARO for NCR and Region II is already processed but is still awaiting for release.

5 Regional Offices (VIII,IX,X, CAR and CARAGA) already submitted the required documents to DBM but are still being processed by the DBM Organization, Position Classification and Compensation Bureau (OPCCB).

DBM is still awaiting the submission of the required documents from the Deped Regional Offices of IV-B, VI,VII and Negros Island Region.

Some of the reasons for the delay cited by the DBM and DepEd are: 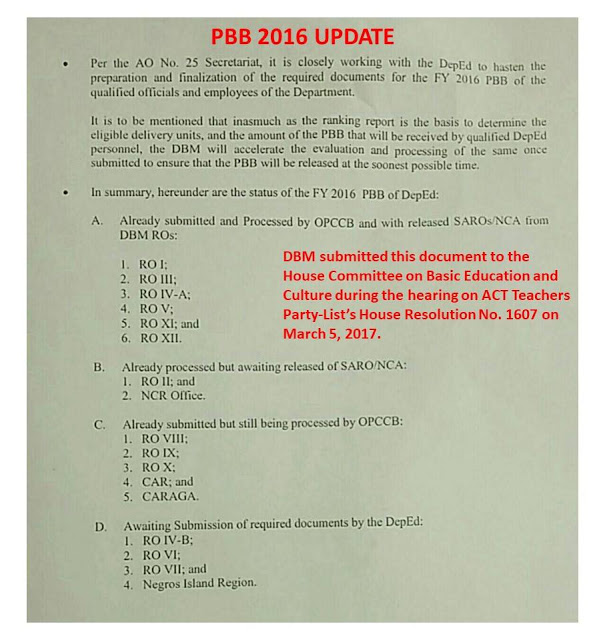