Panelo: Duterte loves the teachers, salary hike may be in 2-3 months

Panelo: Duterte loves the teachers, salary hike may be in 2-3 months 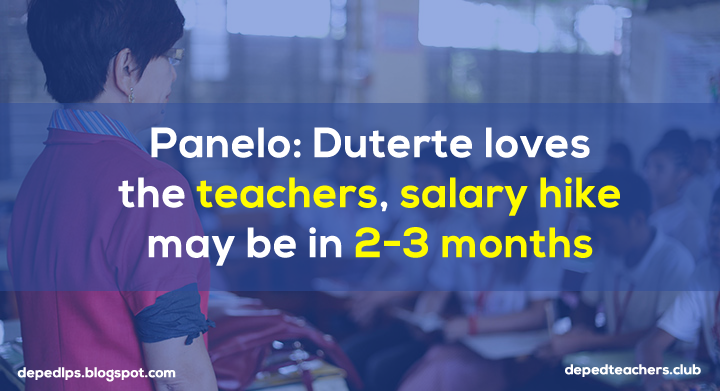 Presidential spokesman Salvador Panelo shared that teachers are loved and well taken care of by the president.

Amidst the looming fears of profiling among members of Alliance of Concerned Teachers (ACT), presidential spokesperson Salvador Panelo assured them that there is nothing to worry about. Panelo said that President Rodrigo Duterte cares about the welfare of educators.

The Alliance of Concerned Teachers (ACT) has slammed the Duterte administration for the “profiling” being done to their members. The teachers group said that the Philippine National Police (PNP) has been visiting public and private schools, trying to get a list of their members. ACT condemned it saying it was an attack against their freedom of expression and self-organization.

The spokesperson even went on to add that the promised salary increase is already in the works. Panelo said, “The President takes care of teachers. He has promised to double their salary. If I am not mistaken, (Budget) Secretary (Benjamin) Diokno said the salary hike may be released in two or three months.”

Panelo said that the President is sensitive to the needs of the teachers.

Panelo further dismissed the fears of ACT group saying, “Maybe they’re just paranoid. You know, you must remember that ACT is identified as a leftist organization. Maybe most of the members are not, but the leaders are.”

The spokesman explained that if the teachers are not doing anything wrong, they should not fear the police.

Last year, the Department of Budget and Management (DBM) said that they are not against an increase on teachers’ salary and will be commissioning a study in 2019 to take a closer look at the issue.

Diokno said that teachers can already expect an increase in their pay on 2018 and 2019 following the two tranches of Salary Standardization Law (SSL).

“We recognize the important role of our teachers. However, we would prefer to let the third and fourth tranches of SSL run their course before we propose a new scheme,” the Secretary said.