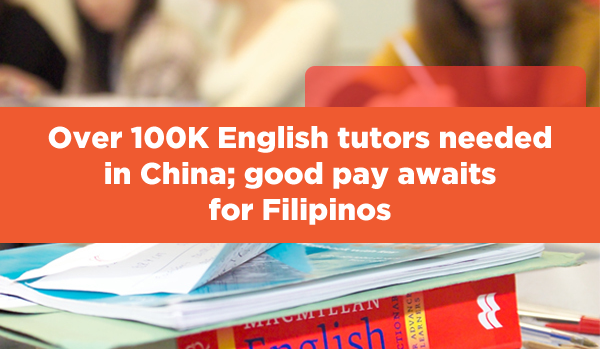 Speaking before 54 students and young professionals joining the China-Philippines Youth Exchange Program, Dr. Zhang Hang, a Chinese language teacher and researcher at the College of International Relations of Huaqiao University, said Friday many Chinese, especially the older ones, can hardly understand, much less speak English.

Zhang said China now has around 10,000 English teachers, mostly from the Philippines.

The Philippines, the professor noted, is known for its excellent English education program, and with its proximity to China, both countries can work together for educational exchanges, especially for strengthening China-Philippines relations.

He said President Rodrigo Duterte’s first visit to China in October 2016 opened new opportunities for the people of both countries and are now coming into reality.

He added presidential daughter, Davao City Mayor Sarah Duterte, is also expected to visit Jinjiang in Fujian province next month for the launch of a direct flight from Davao to China and vice versa.

Meanwhile, the Chinese Embassy in Manila and its consulate centers in Laoag, Cebu, and Davao, have established at least four Confucius Institutes in these localities to strengthen Sino-Filipino relations through education.

At the University of San Carlos in Cebu City, for example, school officials said some of their students and faculty started to engage in academic and cultural exchanges with China.

The university has reported hosting 19 countries for international students and 150 international linkages and partners for various programs.

“The young people, with an average age of 25 for example, are the future of the world. We think that if the young people of both countries will get to know more about each other in culture and history, it will definitely benefit both countries,” said Jiang Fan, coordinator of the Fujian Provincial Foreign Affairs Office.

In an earlier forum on Oct. 19, Dr. Imee Martinez, Director of the University of the Philippines (UP) Diliman Office of International Linkages, pledged support to the China-Philippines Youth Exchange Program, saying UP is always open to exploring areas of cooperation and linkages with foreign and local institutions.

UP is currently promoting Chinese language education to promote harmony between China and the Philippines.

At present, over 1.5 million Chinese nationals live in the Philippines, including Chinese-Filipino tycoon Henry Sy, who traces his roots to Jinjiang City.

In partnership with Xiamen University in Fujian, China, UP is encouraging learners to take advantage of the exchange program, offering courses like social and natural sciences, arts and humanities, medicine, engineering, and agriculture and fisheries.

The Fujian Provincial Government, in partnership with the Chinese Consul Generals of Cebu and Davao and the Friends of the Philippine Foundation, is sponsoring the 14-day Philippine-China Youth Exchange Program, where the participants are visiting various universities, economic zones, tourism sites, and provincial governments in the Philippines and in China.

Following their week-long visit to the Philippines’ Commission on Higher Education and some best universities in Manila, Cebu, and Davao, the participants arrived in Xiamen, China on Oct. 24 to continue the familiarization tour in Fujian province until November 1. In China, the delegates will visit the Xiamen Exhibition and Planning Hall, Huaqiao University, Quanzhou Normal University, Fujian Medical University, University of Traditional Chinese Medicine, Minjiang University, several museums, manufacturing firms, and tourist attractions. (PNA)