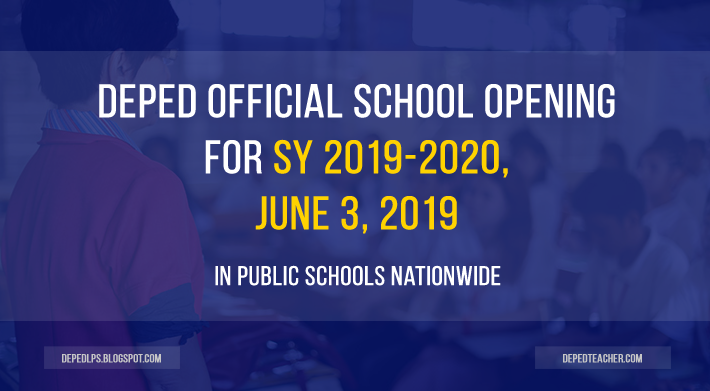 The Department of Education (DepEd) on Monday confirmed that the opening of classes for School Year (SY) 2019-2020 in public schools nationwide is on June 3.

Citing Republic Act No. 7797 or “An Act to Lengthen the School Calendar from Two Hundred (200) days to not more than Two Hundred Twenty (220) Class Days,” DepEd said that the first day of classes in public elementary and secondary schools in the country will be on Monday, June 3.

In RA 7797, Section 3 (Start of the School Year), it is stated that: “The school year shall start on the first Monday of June but not later than the last day of August.”

Meanwhile, to help ensure the smooth opening of classes in all public schools nationwide in June, the DepEd has also announced the launching of the national Oplan Balik Eskwela (OBE) for SY 2019-2020.

Education Secretary Leonor Briones, in a DepEd memorandum, announced that the annual activity will run from May 27 to June 7, 2019.

The OBE, Briones said in a memorandum signed March 13, 2019, is DepEd’s annual initiative to “engage agencies, organizations, and all other stakeholders in preparation for the opening of the school year.”

“The OBE is part of the Department’s efforts to ensure that learners are already properly enrolled and able to attend school by the first day of classes,” Briones said in the memo.