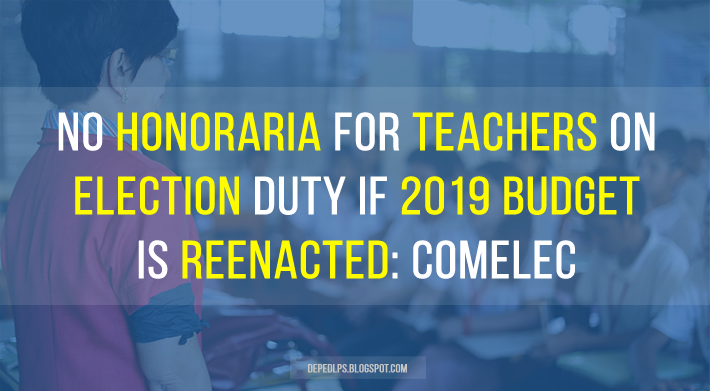 MANILA — A reenacted budget will mean that teachers who will serve as Board of Elections Inspectors (BEIs) in this year’s mid-term elections will not be paid for their services.

Commission on Elections (Comelec) spokesperson James Jimenez said this could be the implication of a reenacted budget on the poll body’s preparations for elections in May.

“(Their work), it is not easy. And the teachers deserve to be (compensated) for it. That is our concern. I don’t want to speculate on how teachers will react if we tell them that they are going to have to work without pay,” Jimenez said in a press conference.

He also appealed to Congress to reconsider the PHP1.9-billion budget it has allocated for the honoraria of public school teachers who will serves as BEIs.

“We are asking the bicameral conference committee to reconsider this. Our budget requirement (for teachers’ honoraria) is PHP3.2 billion,” he said.

While hoping that the 2019 national budget would be approved, Jimenez said they are open to explore options regarding the matter.

“We do not close the door for any possible solutions. Those are very welcome and we are certainly going to explore each one of them to the fullest,” he said.

Since January 1 this year, the government has been operating under a reenacted budget after Congress failed to pass the 2019 national budget on time due to allegations of “pork” insertions.

Lawmakers are possibly looking to just allow the government to continue operating on a reenacted budget for this year. (PNA)