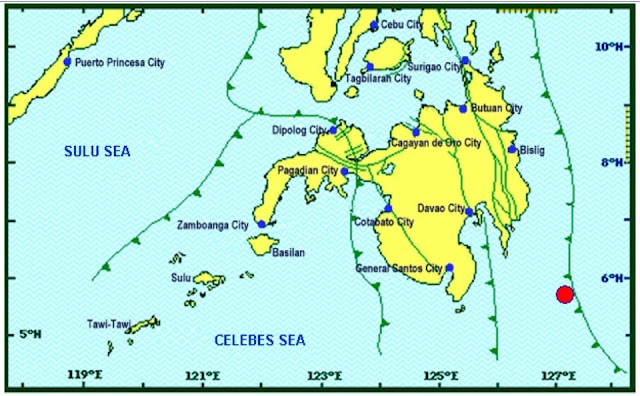 MANILA, Philippines (4th UPDATE) – A magnitude 7.2 earthquake struck off east of Governor Generoso town in Davao Oriental on Saturday, December 29, with possible tsunami threat for parts of the Philippines and Indonesia.

According to a bulletin posted by the Philippine Institute of Volcanology and Seismology (Phivolcs), the quake was recorded at 11: 39 am Saturday. Aftershocks were expected.

It initially reported the earthquake at magnitude 7.1.

Phivolcs said minor sea level disturbances such “strong currents and rapid rise and fall of seawaters” can be expected on the following areas.

The public is advised to be alert for “unusual waves” and not to go to the coast from 12 pm to 2 pm Saturday. The first tsunami waves were expected to arrive between those hours, with height less than one meter above normal tides.

Phivolcs added the “waves may continue for hours”

Phivolcs also warned those located very near the shoreline to “move farther inland.” They also advised owners of boats near coastal waters to secure their boats and stay offshore in deep waters instead.

Meanwhile, monitor US Geological Survey reported a magnitude 6.9 quake, striking at a depth of 59 kilometers.

The Pacific Tsunami Warning Center said “hazardous tsunami waves from this earthquake are possible” along the coasts of Indonesia and the Philippines.