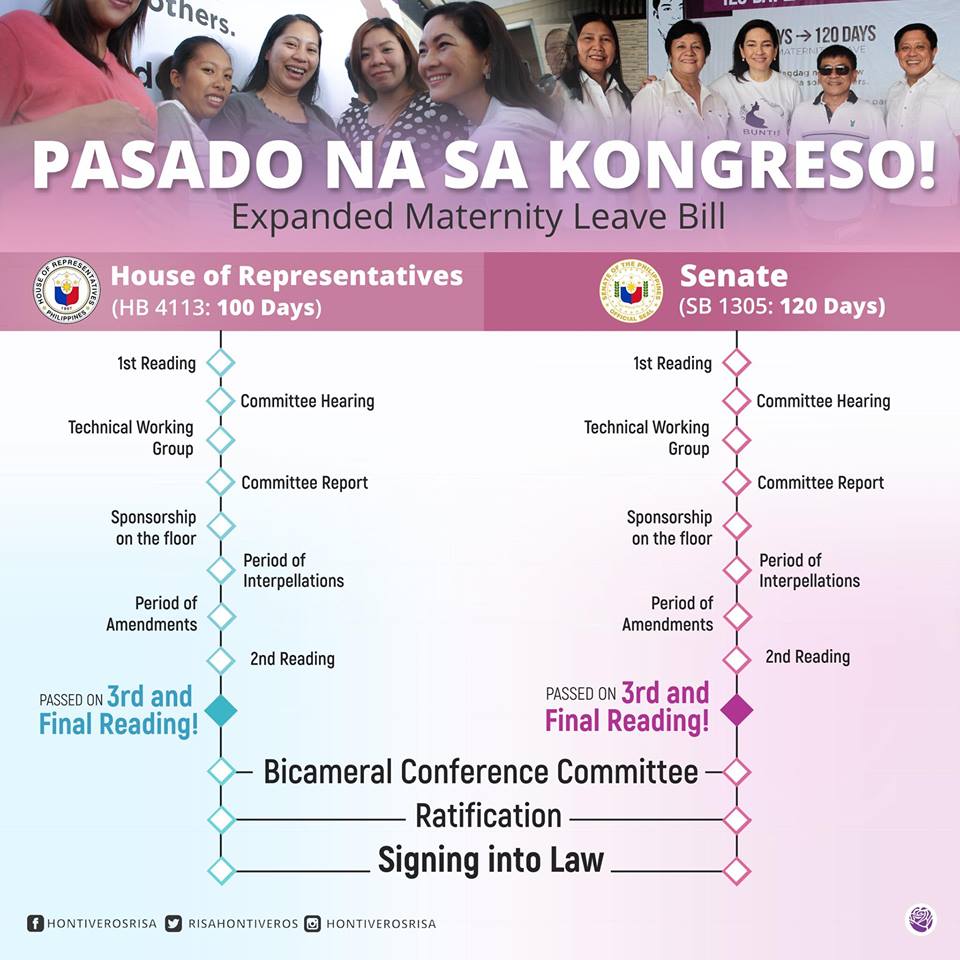 Akbayan Senator Risa Hontiveros on Tuesday lauded the passage on third and final reading of the 100-Day Expanded Maternity Leave Bill in the House of Representatives as “an historic victory for women”.

Hontiveros, chairperson of the Senate Committee on Women, Children, Family Relations and Gender Equality, championed the counterpart bill in the upper chamber that was approved in March last year.

The House of Representatives’ version seeks to improve on the country’s paid maternity leave policy by adding 40 days from the current 60 days. “After 26 years, we are finally able to upgrade this outdated policy. After 26 years, women have won this right in the workplace”, said Hontiveros. The Senate’s version proposes an extension to 120 days.

The Akbayan Senator maintained that an extension of the paid maternity leave will improve the health of women, their newborn and their family. “Enough rest will give new mothers time for recuperation and recovery from childbirth”, said Hontiveros.

“It will also improve on families’ overall well-being, with newborn infants being properly taken care of, with enough skin-to-skin contact with their mother”, she added.

Hontiveros also explained that the measure, once fully enacted into law, will improve productivity for businesses. “A healthy working population means less sick leaves and more productivity”, she said.

At 60 days, the country’s maternity leave policy lags behind Malaysia, Cambodia, Thailand, and Indonesia (90 days each), Myanmar (98 days), Laos and Brunei (105 days). Singapore and Vietnam tops the list of the best maternity leave policy at 112 days and 180 days respectively. “This measure will make our labor practices at par with our ASEAN counterparts. An expanded maternity leave law will signal to the world our commitment to working women’s rights and welfare”, she furthered.

The Senator also congratulated her House counterparts: partylist representatives Bernadette Herrera-Dy (Bagong Henerasyon) and Tom Villarin (Akbayan) for championing the said measure. “Together with women and labor advocates, they have been working tirelessly to ensure the passage of this bill. They are our women and labor champions”, said Hontiveros.

The measure will now move to a bicameral conference committee that will consolidate both versions of the bill for signing of the President into law. “I am looking forward to working with our House counterparts to bring forward this progressive measure that will benefit Filipino families”, concluded Hontiveros.