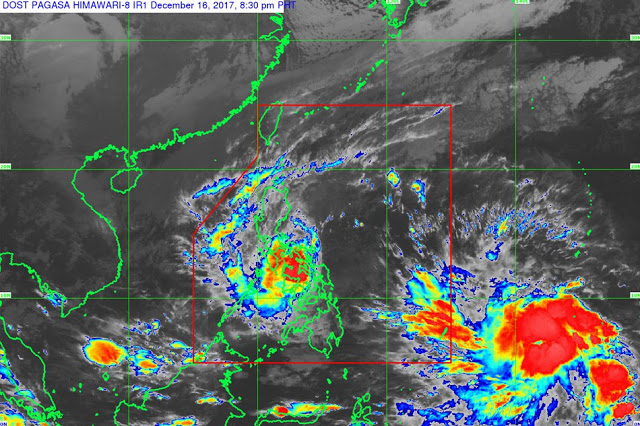 The government’s disaster risk reduction council recommends a holiday staycation for those who have filed their Christmas vacation leaves.

It notes that while the tropical depression spotted off the coast of Mindanao has weakened to a low pressure area, it is still likely to bring heavy rains this weekend.

“It could be better to have a staycation to avoid accidents,” Romina Marasigan, spokesperson for the National Disaster Risk Reduction and Management Council (NDRRMC), said at a press conference.

Marasigan said it would be better to travel before the weekend to avoid being stranded at seaports and airports.

“We are expecting the rains would continue, especially in places hit by [Tropical Storm] ‘Urduja’ [international name: Kai-tak]. You might have filed your leaves and expecting you can go home. But especially for those with south of Metro Manila as destination, please plan your travels. Travel now or tomorrow,” she said.

“But if travel is toward the weekend, you might want to consider postponing it because you might be stranded at seaports and airports.”

The low pressure area was located 1,450 kilometers east of Mindanao as of Monday afternoon, according to the weather bureau.

“Hopefully, this will not be as threatening but we should not be complacent. It is still in the waters and it could still form into a storm. We continue to prepare for this,” Marasigan said.

Rains, rough seas
While Urduja, now a tropical depression, is expected to exit the Philippine area of responsibility on Tuesday, the weather bureau still warns of rain and rough seas in some parts of the archipelago due to the northeast monsoon and the tail end of a cold front.

In a press briefing at 5 p.m. on Monday, weather specialist Gener Quitlong said Urduja would no longer have any direct effect on the country.

As of Monday afternoon, the center of Urduja was spotted about 120 km northwest of Puerto Princesa City. It packed maximum sustained winds of 45 kilometers per hour near the center and gusts of up to 60 kph.

Scattered rain showers and thunderstorms are expected over the provinces of Isabela, Aurora and Quezon on Tuesday due to the tail end of a cold front.

For the same reasons, sea travel is still not advised in Palawan, as well as in northern and central Luzon, southern Luzon and the eastern seaboard of the Visayas.