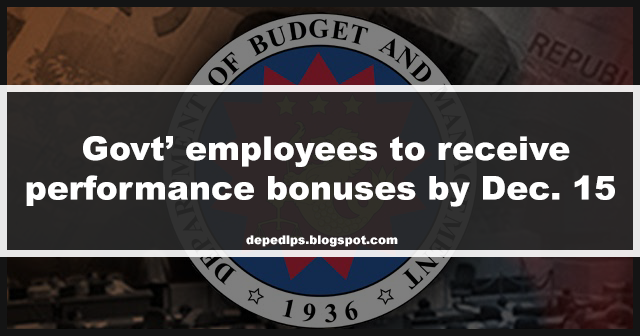 The government will release the P5,000 performance bonus for each of its employees by Dec. 15.

In a statement Monday, the Department of Budget and Management (DBM) said the productivity enhancement incentive (PEI) would be given not earlier than the announced date.

According to the DBM, an estimated amount of P7.5 billion has been set aside for national government agencies in the 2017 budget to finance the PEI grant of around 1.5 million government workers.

The DBM said the employees would receive the bonuses provided that they were still in the service as of Nov. 30, 2017 and that they had rendered at least a total of four months of at least satisfactory service as of the same date.

Under DBM Circular No. 2017-4, performance bonuses will be granted to all positions of civilian personnel, officials and employees of local government units, and military personnel of the armed forces, and uniformed personnel of the police.

The PEI, as mandated by Executive Order 201 s. 2016, is intended to improve the productivity of government workers.

The PEI is granted to government workers, alongside the upward adjustment of the salary schedule in the bureaucracy, and new benefits such as mid-year bonus equivalent to one month basic salary.