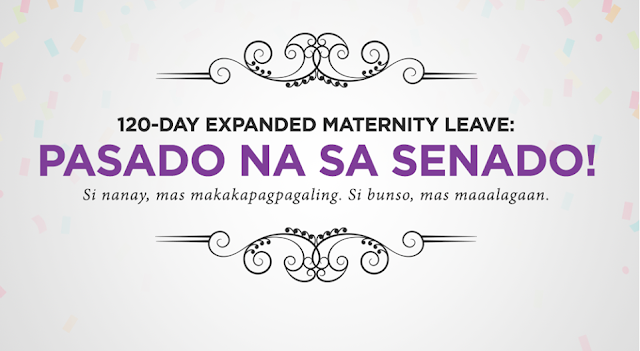 MANILA, Philippines – The Senate on Monday, March 6, approved on 3rd and final reading the bill seeking to grant 120 days of maternity leave to expectant mothers.

With a vote of 22-0, Senate Bill 1305 or the “Expanded Maternity Leave Law of 2017” was passed. Senator Risa Hontiveros, chair of the Senate committee on women, children, family relations, and gender equality, authored the measure.

Under the bill, all female workers, regardless of civil status or legitimacy of her child, shall be granted 120 days maternity leave with pay and an option to extend it for another 30 days without pay. Under the current law, expectant mothers are allowed only 60 days of paid leave.

Single mothers shall also be granted a total of 150 days maternity leave with pay.

Fathers would also benefit from the measure if passed into law, as it seeks to grant them 30 days of leave – more than the allowed 7 days of paid leave under Republic Act 7322.

Under the bill, 30 of the 120 days can be transferred to alternate caregivers, such as the spouse, common-law partner, and relative up to the 4th degree of consanguinity, including adoptive parents.

In the 16th Congress, the Senate approved a similar measure, seeking to grant 100 days of maternity leave, but it was not enacted.

Hontiveros said the measure, if passed into law, would make the country compliant with the International Labor Organization’s standards on maternity protection.

“Our maternity leave law, both for the public and private sectors, only provides 60 days paid leave – 38 days short, more than 5 weeks short of the minimum prescribed under the International Labor Organization’s Convention 183,” she said. The convention mandates a minimum of 98 days maternity leave.

Senator Francis Pangilinan, who filed a similar bill, lauded the passage of the measure.

A counterpart measure in the House is pending 2nd reading approval.

Here are the other important provisions of Senate Bill 1305: