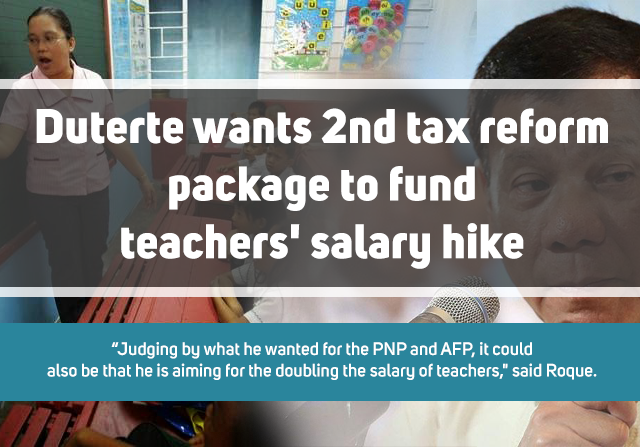 MANILA – President Rodrigo Duterte is now seeking to increase salaries of public school teachers, Malacañang said Tuesday, after the government moved to double the pay of soldiers and police officers.

Presidential Spokesperson Harry Roque said Tuesday that Duterte has instructed the budget department to find means to increase teachers’ pay as the government prepares for the submission of its second tax reform package to Congress.

Roque could not say how big of an increase the President is seeking but said it may be the same as the hike in the pay of Armed Forces of the Philippines (AFP) and Philippine National Police (PNP) personnel.

“Judging by what he wanted for the PNP and AFP, it could also be that he is aiming for the doubling the salary of teachers,” said Roque.

Teachers’ salaries are expected to increase in two more tranches in 2018 and 2019, as mandated by Executive Order 201 signed by former president Benigno Aquino III.

The Teachers’ Dignity Coalition has been pressing Duterte to raise salaries of educators after the government allowed loan payments to be deducted from their pay.

The DepEd, in its Order No. 38-2017, earlier gave the go signal to deduct payments for Government Service Insurance System (GSIS) and private loans from teachers’ salaries.

Since the order’s release on July 31, several teachers have received salaries below the mandated net take-home pay (NTHP) of P4,000. One public school teacher told ABS-CBN News that her NTHP went down to P180.