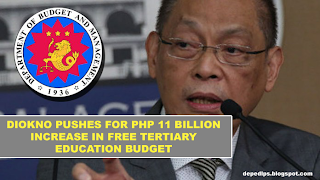 MANILA-Budget Secretary Benjamin Diokno revealed today at the 2018 Philippine Association of State Universities and Colleges (PASUC) Midterm Convention Opening Ceremony at the SMX Convention Center that the Department of Budget and Management has proposed an increase of PhP 11 billion for the Free Tertiary Education Program of the Duterte Administration.

Secretary Diokno shared the present spending for the governmentâ€™s Free Tertiary Education Program is at PhP 40 billion. The Budget Chief has proposed to increase this to PhP 51 billion for 2019.

Of this amount, PhP 44 billion is proposed to be released to the Commission on Higher Education (CHED) while PhP 7 billion will be allocated to Technical Education and Skills Development Authority (TESDA).

Secretary Diokno, meanwhile, advised the audience composed of presidents and top executives of state universities and colleges to invest in competent faculty.

â€śInvest in competent faculty; it accounts for more than half of student performance, more than the buildings,â€ť he said.

The Philippine Association of State Universities and Colleges Midterm Convention is an annual gathering of PASUC attended by presidents and representatives of state colleges and universities from all over the Philippines.