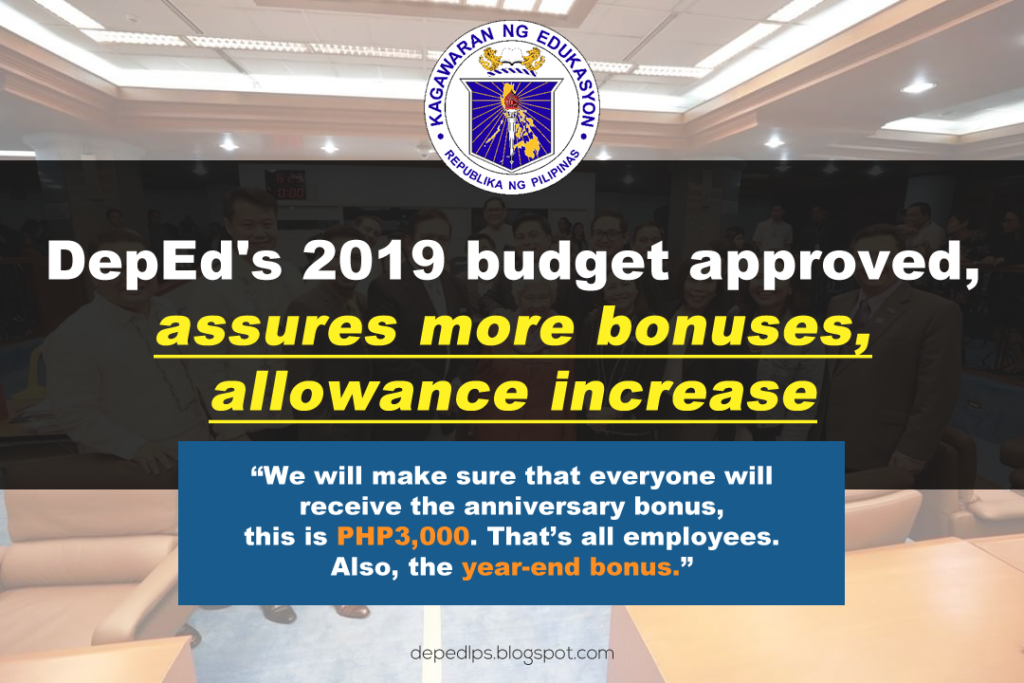 MANILA, Philippines – The Department of Education’s proposed budget for 2019 has finally been approved by the Senate.

DepEd Executive Committee, led by Secretary Leonor Magtolis Briones, and budget sponsor Sen. Bam Aquino breathed a sigh of relief after the Senate approved the education budget during a plenary hearing that lasted over an hour.

Meanwhile, DepEd Undersecretary Finance-Budget and Performance Monitoring Annalyn Sevilla gave assurances that teachers can expect more good news in the coming year. First, she addressed the issue of bonuses. The Education official clarified that they have worked hard to give this year’s bonuses on time.

Sevilla said, “We will make sure that everyone will receive the anniversary bonus, this is PHP3,000. That’s all employees. Also, the year-end bonus.”

She also clarified why some personnel have yet to receive the bonus. Sevilla said that DepEd is a big organization, so it might take time for teachers and personnel in remote schools to receive their bonuses.

Nevertheless, the DepEd official gave an assurance that their personnel can expect more bonuses and higher allowance by 2019.

Sevilla said the agency has worked hard to implement an increase in the allowances and the benefits stated in the Magna Carta for Teachers and other personnel.

The agency already made a move to increase the chalk allowance from P3,500 to P5,000.

Sevilla said, “Increase for chalk allowance will be in 2019. In fact, there will be more increases in 2019. We just don’t want to announce hangga’t di pa siya naisasabatas (while it’s not yet ratified).”

While the salary increase is still being put on the shelf, DepEd said they are already working on several financial benefits for their teaching and non-teaching staff.