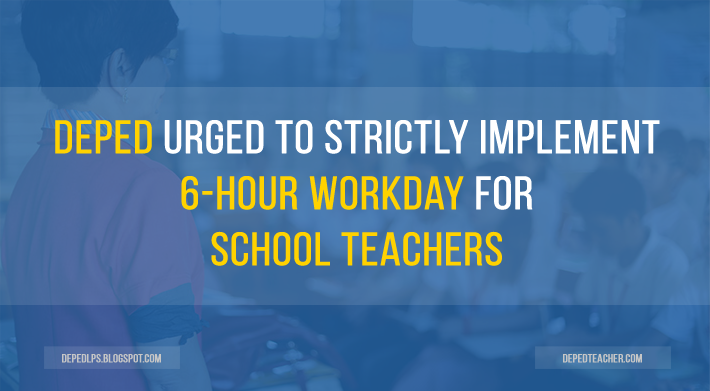 A teachers’ group has renewed their calls for the strict implementation of the “6-hour workday” policy.

The Teachers Dignity Coalition (TDC) urged the Department of Education (DepEd) to release their guidelines in implementing a standardized six-hour workday just before the school year ends.

Teachers Dignity Coalition ( TDC) national chairperson Benjo Basas said, “Until now, many teachers are forced to stay in their respective schools for 8 hours or more, even without classes or official functions.”

“This issue has been a perennial problem in most schools and has always been the reason for conflicts in schools between teachers and administrators,” he added.

As early as 2008, the Civil Service Commission (CSC) has released a resolution ordering the DepEd to make guidelines for the implementation of “Six-Hour Workday”, including the requirements for a possible overtime at work.

Basas explained that two hours intended for the completion of other tasks incidental to normal teaching duties may just be done at home.

However, Basas lamented that DepEd “failed to implement the resolution” despite the issuances from former Secretary Jesli Lapus in 2008 and 2009 – through DepEd Memorandum 291 and DepEd Order 16, respectively.

The TDC chair recognizes that while schools have their own policies, they are pushing for a “default policy should be uniform and applicable to all schools and not just in Metro Manila and CALABARZON or in areas where teachers are brave enough to engage the management in dialogues or fight.”

Basas suggests to follow the TDC-CALABARZON measures to ensure the strict implementation of the 6-hour workday policy. The measures involve:

The said proposal has already been adopted and included in the Regional Memorandum 550, s. 2018 released by San Antonio on September 20, 2018. Shortly, DepEd Regional Offices in CARAGA and Bicol followed suit in October and November, respectively

Ritchie Salubre, a teacher in Dasmarinas City and president of TDC-CALABARZON said, “But still, some schools are not compliant with the recent order. In this instance, the DepEd must show its sincerity and firm resolve to call those who are defiant to its policy. Surely, this will make a big difference in an effort to enhance the teachers’ rights and welfare.”

The Six-Hour Workday is just one of the seven demands by the TDC that they sent to education secretary Leonor Briones. Other demands include the salary increase, fixing GSIS policies or creating a separate insurance system specifically for teachers.

The Department of Education (DepEd) clarified that following the Civil Service Commission (CSC) Resolution No. 080096 issued in 2008, teachers are not exempted from the eight-hour workday in government. However, teachers are allowed to make use of two hours doing teaching-related at home after rendering 6 hours of actual classroom teaching.

The statement also reiterated the provisions under DepEd Memorandum No. 291 s. 2008 and DepEd Order (DO) No. 16, s. 2009, with specific instructions that: