The Department of Education (DepEd) is scheduled to conduct the Early Registration of incoming Kindergarten, Grades 1, 7 and 11 learners in all public schools nationwide starting this January. 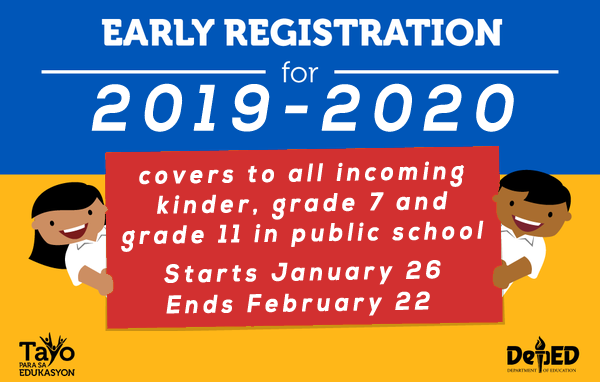 Based on the “Basic Education Enrollment Policy” issued by Education Secretary Leonor Briones in DepEd Order No. 3 series of 2018, the Early Registration – which covers incoming kinder, grade 7 and grade 11 learners in public schools – “shall be conducted from the last Saturday of January to the last Friday of February of each year.” For 2019, the last Saturday of this month falls on January 26 while the last Friday of next month falls on February 22.

Briones, in the said DepEd Order, noted that “incoming Grades 2-6, Grades 8-10 and Grade 12 [learners] are considered pre-registered” thus, there is no need for these students to participate in the Early Registration.

Early Registration, Briones explained, is conducted to “ensure all new entrants for Kindergarten, Grades 1, 7 and 11 learners are registered” as well as to “locate, identify, and register” out-of-school children (OSC) and youth (OSY) in the community. These may include learners living with disability/ies; living in an off-grid community; living in a barangay without a school; living in a geographically isolated area; displaced due to natural disaster; living in an armed conflict area, living in an area with high level of criminality/drug abuse; having chronic illness; having nutritional problem/s; victim/s of child abuse or economic exploitation; stateless or undocumented; in conflict with the law; living on the streets; and those who are no longer in school but interested in going back to schools.

Briones noted that offices in all governance levels – specifically those in areas with learners that have been earlier identified – shall conduct an information dissemination and advocacy campaign “to raise public awareness of early registration.”

Elementary and secondary public school officials, Briones said, are also “expected to designate Early Registration Desks or Registration Centers in the school premises and individuals who will handle the registration.”

Briones said that each SDO must also identify areas “without schools but may have enrollees” and the Schools Division Superintendents (SDSs) shall “designation a focal person” to work with the concerned Barangay Chairperson for early registration to be done in the barangay. “Likewise, registration of street children who were identified during Child Finding Activities shall be conducted by the SDOs in coordination with the local social worker of the Department of Social Welfare and Development (DSWD),” she explained.

Early Registration has become an annual activity of DepEd to “help the public schools to better address and prepare for possible issues and concerns” at the start of the new school year in June 2019. Moreover, the Early Registration also “seeks to understand the barriers to have access to education and the possible local solutions or interventions that will bring learners to school and will ensure their completion of basic K to 12 education.”

Learners were also reminded to “register early in schools where they opt to enroll.” Those who will participate in the early registration may also be required to bring some documents such as Philippine Statistics Authority (PSA), formerly National Statistics Office (NSO), birth certificate and report cards. Pursuant to its “No Collection Policy,” DepEd also reiterated that there is “no registration fee or any payment must be collected from the child or their parents/guardians” during the Early Registration period.