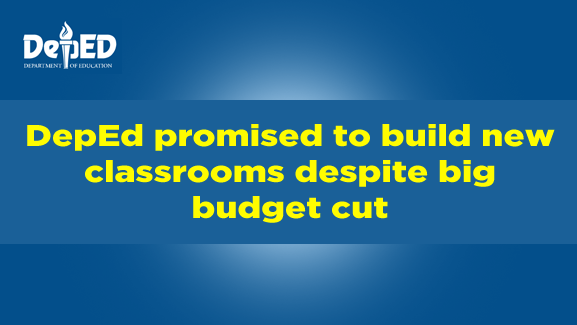 Metro Manila — The Department of Education (DepEd) on Thursday assured the public the hefty cut in its 2019 budget will have little impact on its projects and several new classrooms will still be built for students.

The agency is taking advantage of the remaining months of the year to obligate funds for projects intended for 2019 before the cash-based budgeting kicks in.

Among the programs which suffered huge budget cuts were the indigenous peoples education, the national assessment for basic education, and the computerization project. More than half of these programs’ budgets were slashed for next year.

The new budget scheme has resulted in budget cuts for several government agencies, including DepEd.

Education Secretary Leonor Briones admitted the cash-based budgeting is a challenge for the DepEd because the academic year straddles two fiscal years.

“We operate under an academic year. We started, for example this year, in June 2018 and our academic year will end in March 2019. So that means you’ll be covering two periods,” she said.

Briones added, “So we will be rushing to accomplish and deliver services, buildings, etc. For this year until December- only up to December – and then another year’s budget will be operating. So this complicates our life.

Despite the challenge, DepEd assured there will be tens of thousands of new classrooms available to students in 2019 even if the agency’s budget for classroom construction is only good for 4,000 rooms.

“We have 80,000 ongoing classroom construction right now that will be delivered from this year until the second quarter of 2019. Our 2019 opening of school year, you will have a lot of new classrooms and buildings,” Sevilla said.

Since there are no funds to build the additional 36,000 new classrooms the DepEd wants, Sevilla said their focus will be on making sure construction begins as soon as possible in 2020.

While DepEd hopes lawmakers will increase its budget for next year, officials say they are exerting all efforts to ensure the quality of basic education will not suffer due to reduced funding.