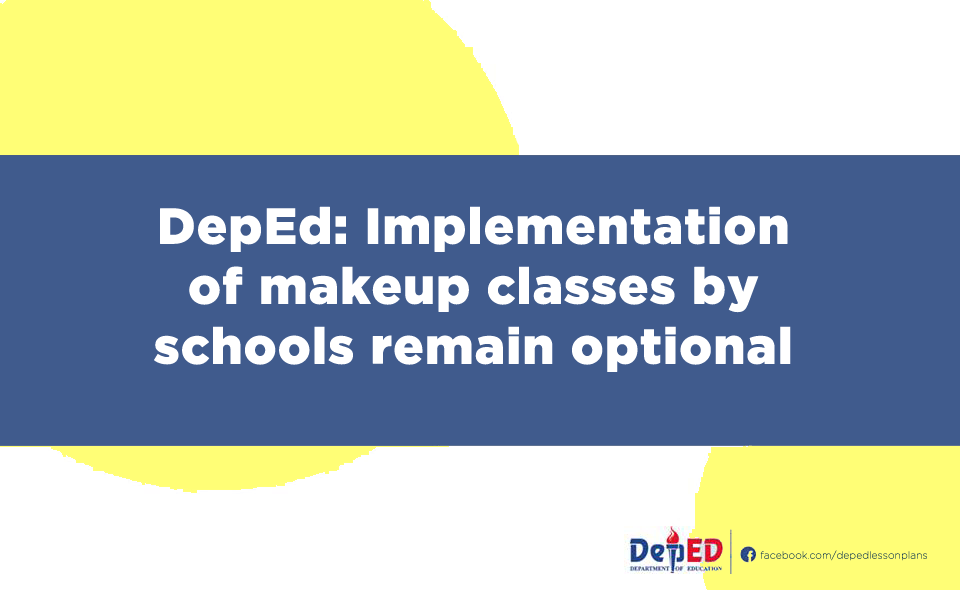 The Department of Education (DepEd) reminded that the implementation of makeup classes by schools remains optional granted that the required contact days for teaching and learning is not compromised.

Education Secretary Leonor Briones noted that makeup classes is only implemented once the required number of school days have been compromised – especially when there are suspension of classes either caused by inclement weather and other disasters.

“Public schools affected by the series of class suspensions are not required to hold makeup classes or add extra hours on school days if the required 180 days of nonnegotiable teacher-pupil contact time is still intact,” Briones said.

Recently, schools in Metro Manila enjoyed a weeklong vacation – from November 13 to 17 – after classes at all levels have been declared due to country’s hosting of the 31st Association of Southeast Asian Nations (ASEAN) Summit.

Due to this, many public schools have started conducting makeup classes – especially on Saturdays – in an effort to ensure that they would no longer have problems catching up when the school year ends.

As reported by the Teachers’ Dignity Coalition (TDC), “some schools division officials are compelling the teachers to report on Saturdays,” particularly in Metro Manila and CALABARZON schools.

However, Briones noted for this school year (SY) 2017-2018, the school calendar contains more or less 204 school calendar days. Of this, only 180 days of actual contact time among the teachers and students are required by the DepEd. “If the schools have less than180 days in their school calendars, then they need to conduct makeup classes,” she said. Makeup classes are usually conducted either on Saturdays or extending school hours on weekdays, if applicable.

Earlier, TDC also called on Briones to clarify the “nonuniformity” of the implementation of make-up classes in the field. The group noted that the number of make-up days differs by division even if they have almost the same number of suspensions in the whole region.

Reacting to this, Briones noted “one size fits all” implementation of makeup is not an option since the situation of schools varies from one another.

Briones noted that asking the DepEd Central Office to decide on the schedule of makeup classes is not very practical. “We let the Schools Division Superintendents (SDS) decide on this because they are the ones who can assess the situation in their areas better,” she added.

TDC also urged DepEd not to use Saturdays for makeup classes since teachers have other schedules as well. “Saturdays are normally used for postgraduate studies where classes are usually taken up once a week while some are barred to work because of their religious belief or use the weekends for family bonding,” the group said.

Briones, on the other hand, noted that schools need not use Saturdays for makeup classes. Aside from extending school hours on weekdays, teachers may give the learners extra assignments or homework to catch up on missed lessons due to the lost school days.