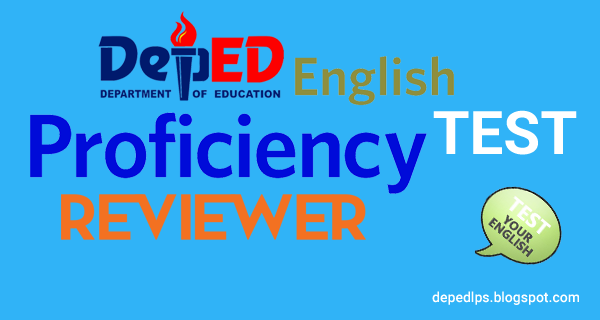 Download the English Proficiency Test Reviewers for New Teachers below:

Rewrite the following sentences with the corrected terminology errors.

1. The birthday celebrant surprised his guests with his remarkable speech.

2. The debator trained hard for the competition but he lost to a more experienced foe.

3. She is now a matured person as evidenced by how she handles life’s pressure.

4. The books might arrive next next week as promised by the teacher.

Answer: the week after next week

5. The jewelries that her mother bought are all fake.

7. The boy was sidesweeped by a speeding car.

8. What kind of perfume did you use this morning?

9. She forgot her TIN number.

10. Aren’t you going to use heavy make-up today?

11. Form a queue and claim your identification card one by one.

Answer: one at a time

12. To settle the matter, let us go to votation.

13. After having passed the rigid training, he is now a full-pledged pilot.

14. The doctor’s advices came at an opportune time.

Answer: “remove or delete In”

31. I was asked to xerox the documents before handing them to the principal.

32. With regards to that defective item, the management is willing to replace it.

Answer: “remove or delete With”

33. How many questionnaires did you float to the respondents?

34. I agree with your brilliant idea.

35. I agree to you when you said that nobody is perfect.

36. His plans are in conformity with his brother’s.

37. Upon reaching the gas station, the man got out of the bus then never came back.

39. Though he speaks fluent English, he was actually raised in the barrio.

40. Are there any questions?

Answer: “remove or delete any”

41. I extended my condolence to the bereaved family.

42. We would like to thank those who in one way or another contributed to this event.

43. Is there something wrong with the word Acknowledgement?

44. Let us abide with the rules and regulations of the school.

45. I want to follow the footsteps of my sister.

Answer: in the footsteps

46. The traffic policeman apprehended the driver who didn’t notice the sign, NO PARKING ON BOTH SIDES.

47. The next part of the program is the induction of newly elected officers.

49. We just celebrated our 15th year wedding anniversary at the Manila Hotel.

50. On behalf of the organization, we would like to express our gratitude to all who took part in this event.

52. He was riding in a bus when they met a tragic accident.

54. I came from Buguias, Benguet. Every summer, I help my parents work in the farm.

55. I graduated at Sipsipnget National High School in 2010.

56. The scissor that I bought at SM Baguio is quite expensive.

57. Many informations have been divulged by the secret agent.

58. His line of business is selling computer gadgets and equipments.

59. He was hospitalized due to electrocution.

60. After the traumatic incident, I think she is alright.

61. She is an impregnable woman.

62. She already casted her vote yesterday.

63. Based from the survey, NAIA is one of the five dirtiest airports in the world.

64. She was taken cared of by her foster parents.

65. My parents work in the garden.

66. I was been the President of the Arts Guild when I was in high school.

67. Calcium is not only good for the bones but for the heart.

Answer: but also for

68. He revenged the killing of his father.

69. I was advised to cover my PIN when withdrawing money in an ATM machine.

70. She is taking up Nursing for her second course.

Answer: “remove or delete up”

71. Hand me your USB so I can save those files.

72. Anyways, that has been the final report to the group.

73. I went to the library to get as many information as I could.

74. The teacher forgot to give the direction in the test.

75. When you go to Manila, better ask for directions so you won’t get lost.

76. Despite of the oil price increase, the drivers remained hopeful for a better 2012.

Answer: In spite of

77. I could not illicit response from her.

78. He is in jail for smuggling elicit drugs into the country.

79. At this juncture, we would like to introduce the Board of Judges.

Answer: the members of

80. Burn the chicken and cook “pinikpikan.”

81. The BSU gymnasium was filled up with people.

Answer: “remove or delete up”

82. I will see you on February for the Panagbenga craze.

Answer: “remove or delete a”

84. My father and mother are supportive to my studies.

Answer: and my mother

85. The host for the BSU Charter Celebration is he.

86. Her obese father is high blood.

87. It is ethical to say, Thank you in a request letter.

91. Her father is a military so people respect him.

Answer: in the military

92. His father, who is a police, was killed in a gun battle.

93. The garbages on the street have not been picked up.

Answer: Throw away your

95. She was unaware of the morning glory in her eyes.

96. The English term for dogmeat is azucena.

97. The English term for sayote is chayote.

98. The symbol (/) used to separate alternatives is slash.

99. The technical term for the symbol & is and.