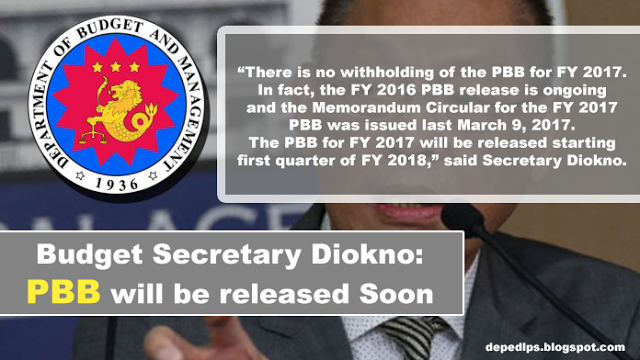 The Department of Budget and Management (DBM) will continue to release the Performance-Based Bonus of eligible government employees, according to DBM Secretary Benjamin E. Diokno.

The Budget chief further added that the PBB has been effective in increasing compliance to good governance standards, instilling financial discipline, and improving performance management.

“We were able to push compliance to budget, procurement, service standards, and SALN disclosures,” said the Secretary.

With the PBB, the agencies are now more conscious about budget utilization, as well as linking individual to office performance.

However, Secretary Diokno explained that there is a need to review the PBB eligibility process.

“We must tighten the system of granting the PBB, simplify the validation and address the unintended consequences, like the tendency of agencies to under-target. In this way, we can push for excellence in performance in the bureaucracy,” said the Secretary.

The DBM and partner agencies are also studying the possibility of focusing the PBB for FY 2018 and FY 2019 on attaining process objectives and results rather than Major Final Output (MFO) targets, in keeping with President Duterte’s order to streamline frontline services and reduce administrative burden.

“We are also thinking of rewarding agencies for management improvements in planning procurement, and financial management to improve their absorptive capacity and deliver more services in line with the Philippine Development Plan (PDP),” added the Budget chief.

The proposed changes in the PBB will be discussed with the members of the AO 25 Inter-Agency Task Force and other concerned agencies. (DBM)