The Commission on Higher Education (CHED) has officially ordered the moving of school opening to August for Academic Year 2019-2020.

“Pursuant to the pertinent provisions of RA 7722, otherwise known as “Higher Education Act of 1994″ and CEB Resolution No. 142-2019, all State Universities (SUCs) and Local Universities and Colleges (LUCs) are enjoined to synchronize its respective Academic Year (AY) to a Fiscal Year (FY) starting FY 2019 and to ensure that starting FY 2020, all SUCs and LUCs have synchronized their academic year to a fiscal year.”

The moving of school opening to August is still in accordance with Section 3 of RA 7722, which states that “higher education institutions shall start the school year on the first Monday of June but not later than last day of August.”

Last year, De Vera explained that the shift to August was considered to help facilitate easier implementation of the Universal Access to Quality Tertiary Education Act under the cash-based budgeting system.

He noted that since the fiscal year and academic year are not aligned, the implementation of the free higher education law would be “severely” affected by the cash-based budgeting system. 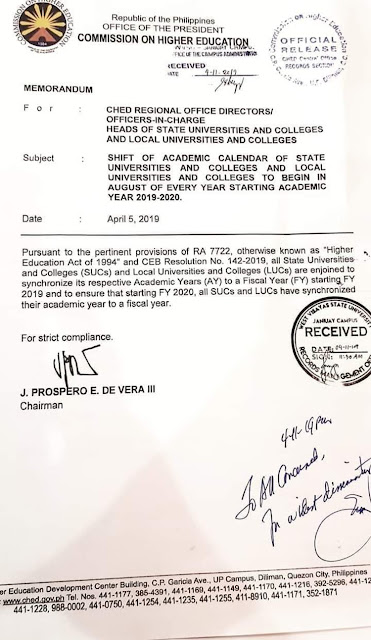 Under a cash-based budget system, agencies are required to spend their allocated funds and deliver projects within the year.

De Vera admitted they have difficulties reimbursing for all schools by the end of the year, as some schools that start in June or July would start their second semester in November.

With the implementation of August opening, reimbursements for the first semester may be finished by the end of the year.

De Vera added that there is a need for synchronization because some SUCs and LUCs have already started opening classes in August.

CHED noted that there are 112 SUCs and and 78 LUCs nationwide that will benefit from the free higher education law.