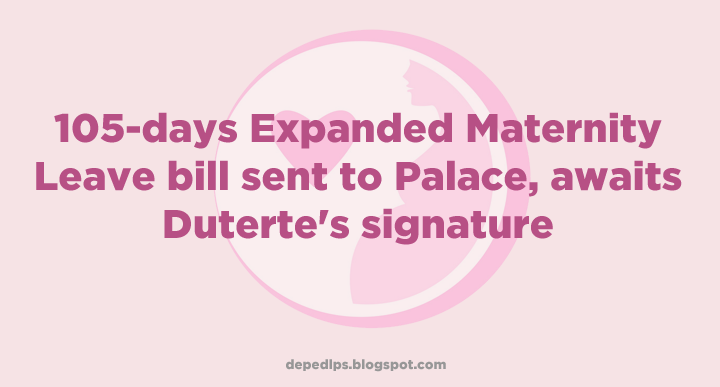 MANILA, Philippines —The Expanded Maternity Leave bill has been transmitted to the office of President Rodrigo Duterte for his signature.

The Senate website showed that the proposed measure was referred to the Office of the President on Monday, January 21.

The Senate and the House of Representatives ratified the 105-day Expanded Maternity Leave bill in October last year.

During the bicameral committee, lawmakers added five more days to the original 100-day maternity bill. This is 45 days more than the previous 60 days.

The bill also allows solo mothers to avail of an additional 15 days, allowing them a total of 120 days leave.

It also doubles the allowed paternity leave to 14 days, from the current seven days.

If the president does not act on the transmitted draft of the proposed measure within 30 days from receipt, it would lapse into law.

In October last year, Sen. Risa Hontiveros hailed the bill’s ratification as “revolutionary” and “a historic victory for women.”

Hontiveros, who is also the vice chair of the Senate Committee on Health, said the last time that the number of paid maternity leave days was increased in the country was 26 years ago in 1992.